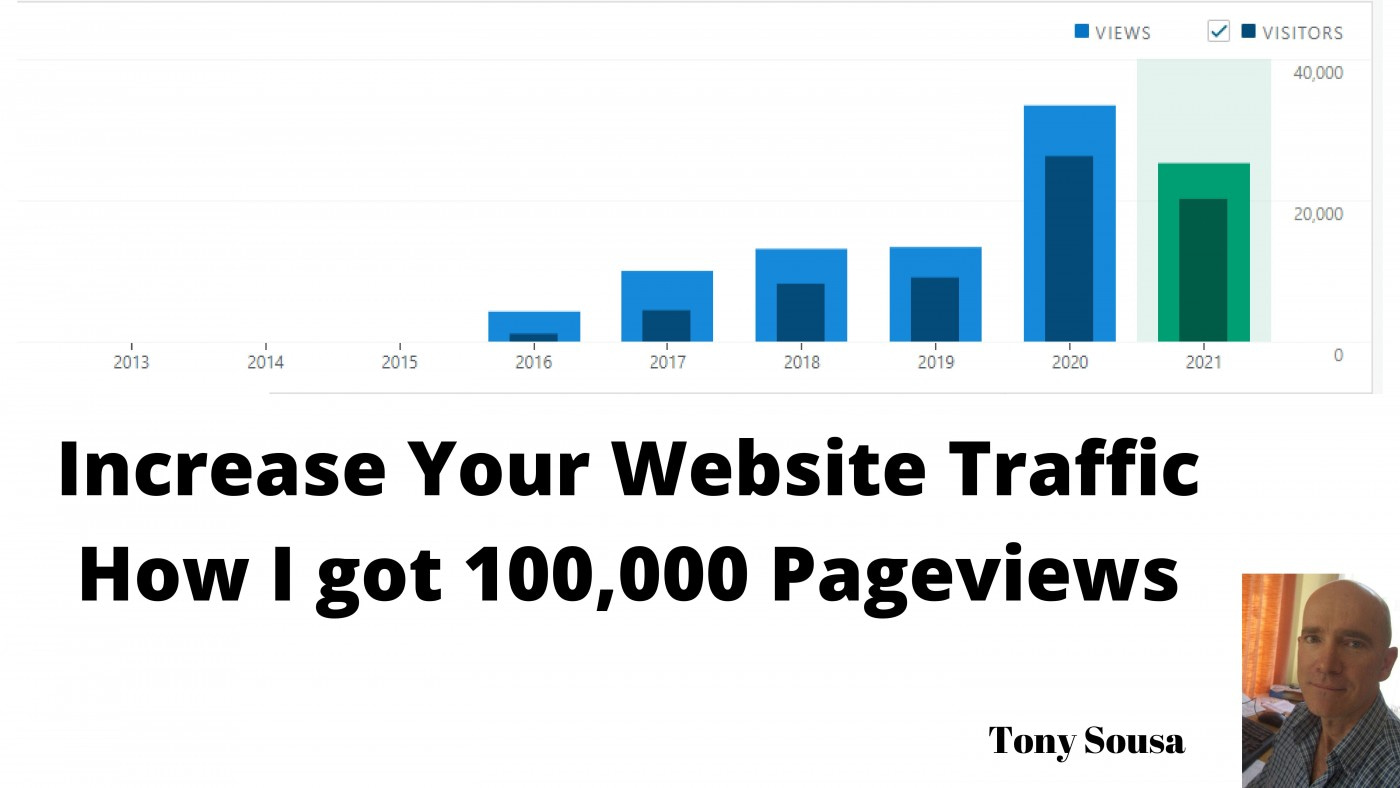 Increase Your Website Traffic – During the past 2 years my websites have experienced a marked increase in traffic mainly because I now post more regularly as well as due to improvements I now make prior to publishing a new blog or page.

One of my websites https://fitandfunnow.com reached 100,000 pageviews and the other site https://www.wordpresstrainingjohannesburg.com isn’t far behind.

There has been a marked increase in traffic in the past two years mainly because I started posting more regularly as well as due to improvements I now make when preparing to publish a new blog or page. Notice the large traffic increase in 2020 as well as 2021. This post you are now reading is being published in early July 2021 and pageviews for the first 6 months this year surpass those in previous years [click on screenshot below to enlarge].

Increase Your Website Traffic – How I got 100,000 PageviewsRead More »

Do you Blog? A Blog Post can be a personal diary, a project collaboration tool, a guide or any means of communicating and publishing information on the web. Blogging and posting relevant content is an incredibly useful tool to increase traffic to your website and to your services. That helps with SEO immensely because it gives Google and other search engines a reason to re-crawl your website to find new content to index.

You may wish to write about a walk you had with family and friends, a recipe you tried, a new workout or you may wish to promote a new service or product. You can write about anything. Everyone is doing it… be it for work or as a hobby.

Use Facebook’s extensive user base of over two billion potential customers to build a list of subscribers for your email marketing list. You can easily do this by adding a MailChimp sign-up form to your Facebook Business page or Fan page.

Facebook has a powerful and free analytics tool – Facebook Insights – that allows you to easily measure the performance of your Business Page. Insights tracks likes, page views, reach and more. Regardless of what your goals are on Facebook: building brand awareness, communicating with customers or getting followers to take an action, Facebook Analytics will help you understand who your most engaged audience is and how they’re interacting with your page.

This story was delivered to BI Intelligence Apps and Platforms Briefing subscribers. To learn more and subscribe, please click here.

Teens and adults in the UK aged 16-24 spend the majority of their time communicating via social media on their mobile devices, according to a recent Ofcom report.

This is a major departure from the communication habits of older age groups in the UK, and highlights how social networks and messaging platforms are changing consumer behaviors.

The varying behavior among different age groups is likely attributable in part to the tendency for younger generations to look to “umbrella services,” or larger services that bundle tools that enable them to complete a number of daily tasks. A user on Facebook or Facebook Messenger, for example, could place a video or phone call, send personal messages or business-related messages, and interact with social content like pictures, video, and posts from friends, without ever departing the Facebook ecosystem.

WordPress Training - Johannesburg
4.9
Based on 14 reviews

Shaun Bennett
11:42 30 Apr 19
Very informative. Learned so much in a few short hours. Thank you for your time!

Iro Promnitz
10:31 16 Jun 18
I have been for a number of training session with Tony, always very informative and enjoyable.

Sue Bradley
11:41 07 Apr 18
Really worth the refresher. I have obtained a better understanding the 2nd time round.

Trevor Levy
10:13 25 Nov 17
I thoroughly enjoyed the training. I learned a lot in a short space of time. Thanks Tony!

Robin Kolberg
16:02 15 Nov 17
Great intensive intro to AddWords - Highly recommended - Will be doing the Wordpress course next
See All Reviews

Loads of features. Algorithms that crunch numbers to provide the best optimization for the best-looking image at the smallest size. Free up to 5000 visitors a month.
I have just installed the plugin. It is quite new but it already has high repute – 5 star rating based on 395 reviews, 80 000 downloads, etc… Ladies and gentlemen, you have to reduce the size of your images if you want faster loading and happy customer experience when users visit your website. WebP was introduced by Google and Google will penalize your site if it does not present images in WebP.
WebP is the way to go. WebP is a modern image format that provides superior (lossless and lossy) compression for images on the web. Using WebP, webmasters and web developers can create smaller, richer images that make the web faster. WebP images are 25-50% smaller than comparable JPEG images at equivalent SSIM quality index.
You don’t have to know the technical terms but you must use an image compression plugin that allows your jpeg, png, gif… images to be converted to WebP.
By Optimole.

Reduce image size and increase your website speed by serving autogenerated WebP images instead of jpeg/png to browsers that support WebP. Works on anything (media library images, galleries, theme images etc).
I installed this plugin in https://fitandfunnow.com/ and the site performance has improved.
By Bjørn Rosell.

A useful plugin if you are a Strava fan and you have a WordPress website. This plugin will enhance your page or blog by providing a great deal of detail pertaining to your Strava activity(ies).
By Carlos Santa Cruz, Justin Foell, Lance Willett, Daniel Lintott and Sebastian Erb.

This plugin enabled increased page speed for my website on both mobile and desktop.
Do you use a cache plugin – if you do which one and what is your experience?

Amazing plugin. I have installed it on all my sites. I use unsplash.com all the time and this plugin allows me to upload high quality, high resolution free photos on any page or post directly from unsplash.com without leaving my site. A BIG time saver! Thanks to the Developers for this very useful plugin and thanks to Peter Pienaar for the tip👍👌👏

Easily Create Beautiful, Functional, Full of Featu
Goodbye to the ‘Links’ Page and Hello to the N
Envato Elements literally means millions of Creati
How to Uninstall Programs/ Apps on Windows 10 #uni
Increase Your Website Traffic – During the past
You can easily delete an Instagram post on desktop
You can easily post to Facebook and Instagram at t
Need to communicate with clients and potential cli
The Site Reviews plugin allows you to easily recei
Congratulations to Michelle on Her HTML; CSS Launc
It is Time for You to Learn HTML (Free Training)
Load More... Follow on Instagram